Welcome to My Curriculum Vitae Page

My background has led me to this amazing place as being a leading authority on international relationships and marriage. 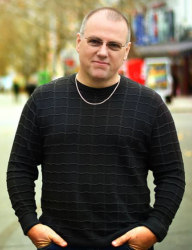 The information that follows includes:

Our current ventures are touching the world with hope.  We have begun a movement to help sincere men and women start genuine relationships and lasting marriages.  In addition, we're helping to care for the orphans in Ukraine.  We're producing training programs that are changing lives.  But it all started with a string of events and experiences that I would not have imagined would come together as they have.

In 1983 began a 12-year career in commercial print sales for large printing companies that specialized in marketing materials for major companies in Silicon Valley. I worked as an architectural rep for building products that created themed environments such as Sega GameWorks and the New York, NY Hotel Casino. In 1998 I began a computer leasing company in California that focused on the Native American tribes.  It grew to $5.5 million before the economic crash of 2008. My next venture was to launch True North Pictures.  I was endorsed by leadership guru John Maxwell and met many wonderful people in the time I worked on the lot at Paramount Studios. In January of 2011 Anna and I formed European Dream Connections, which subsequently became DreamConnections.com in 2012.  This international matchmaking company has grown exponentially every year since. We created the 501(c)3 non-profit company, Abundance International, to provide support for the orphans in Ukraine.

"This man is abundance PLUS! I've spent time with Mark in both a business and social setting, and he is nothing less than brilliant!

This is a man who will inspire you to take action in new and different ways, who will listen intently and help you get past obstacles and into new territory fast.

He has an amazing quick mind and a witty personality. A wonderful person to work with."

(Written September 6, 2009.  Stephanie was with another company when working with Mark Edward Davis at Abundance Int'l)